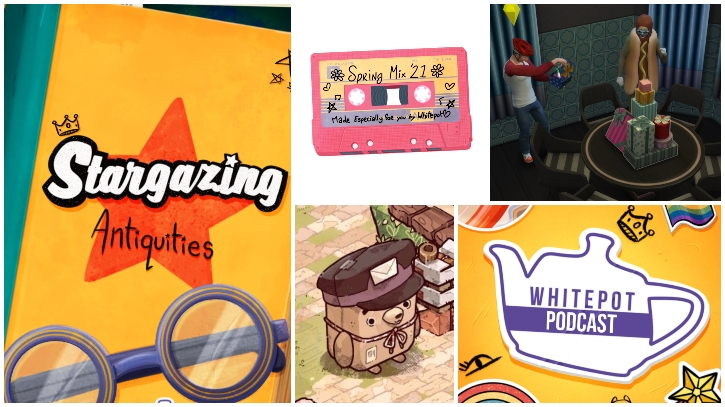 Hello there, back with another Whitepot Wednesday Thursday (oops) blog post – and this month we’ve recorded a special podcast episode! Listen to our deep-dive into the concept and development of StarGazing, and let us know what you think of the format!

It’s (hopefully) the first of many, so please excuse any technical hitches as we get to grips with all things audio… 🙂

Ep 1: How We Made Stargazing

Hello! Welcome to the first episode of The Whitepot Podcast. In this inaugural episode we discuss how we made our mobile puzzle game: Stargazing.

As well as that, we have updates coming to StarGazing, and those all-important Whitepot recommendations.

Since StarGazing’s release last month, we’ve been working on additional constellation packs for the game, and discussing what’s next for Whitepot Studios. It’s all very exciting 😀

Last month, we finally released StarGazing for Android and iOS. With your support we’re currently sitting on a rating of 4.8/5 stars on both the Android and iOS stores, so we’d like to say a big thank you to everyone that has supported us in any way – be it sharing your scores, removing ads, leaving a review, or even just downloading and playing!

We’ve received a lot of kind words about StarGazing, which has been really wonderful to see! You can check out some of those for yourself here:

But we’re especially thrilled and being added to Pocket Gamer’s list of best mobile games in 2021 so far and receiving a Silver 4/5 Rating from them! 🥳

“With puzzles taking a couple of seconds, it’s great for a quick session, or you can play through multiple levels if you have time.”

And, bringing us nicely onto the topic of scores is this excerpt from Johnny Cullen at PlayDiaries:

There’s also leaderboards too. And it’s on that front that it’ll get crazy competitive. In fact, it already is from first-hand evidence. The Northern Irish games industry has been competing with one another for the better part of the day to top one another and beat their times. It’s genuinely starting to get ugly, akin to the fight in Anchorman.

We were honestly surprised to see a speed-running trend develop in the community – but it has been lovely to see our casual, chill constellation game have such a competitive community of players! So much so that we included the option to view your completion times with milliseconds, and you can see for yourself how to do that here:

Since StarGazing launched, we’ve released an additional free constellation pack based on Animals – it includes additional constellations (bringing us up to a total of 69, nice), new unlockable achievements, and that all important milliseconds toggle mentioned above.

Take a closer look at assets from the game and share screenshots with your friends.

We’re back with what we’ve been reading, watching, listening to and playing the past few months.

Adam: “Other than playing our latest release, Stargazing, I’ve recently been on an older online FPS kick, having been playing Overwatch, Killing floor 2 and Battlefield 4. All of which, you’ll be glad to know, still seem to have fairly thriving communities.

I watched Knives Out over Easter – which I thought was good but wouldn’t rate it in my favorite movies. At the behest of a few anime loving friends I also watched Dorohedoro on Netflix, I’m looking forward to seeing a second series of it at some point since, while it was intriguing, I feel like the story was really getting going by the end of it. And while my trash TV viewing has been down recently I did watch all of The Circle on Channel 4 which I highly encourage everyone to check out.”

Vicky: “I found out about a subreddit called /r/dontyouknowwhoiam, which led me down a rabbit-hole to /r/dontyouknowimtonyhawk – which is mostly filled with content from Tony Hawk, where he recounts how people often come up to him and say, “Hey, has anyone ever told you that you look like Tony Hawk?”

The next logical step of course – and I’m sure you’ve reached the same conclusion I did already – was to make Tony Hawk in the Sims 4 and pretend other Sims were going up to him and saying, “Hey, has anyone ever told you that you look like Tony Hawk?”. This intention has all but vanished, replaced by a melodrama of Tony’s life after he married base-game sim Dennis Kim, who now dresses as a hot dog.

I’m sure you have many questions, but none more burning than this one – Sims 4 Tony Hawk skateboard expansion when?”

Matt: Recently I’ve been finishing up the Spyro Reignited trilogy but over the break I really got into Subnautica on xbox. It’s a really wonderful game and has one of the best vehicles in a game that I’ve ever played, the Seamoth is just a lot of fun to control and zip about the ocean floor in. It didn’t always go so well, a few leviathan encounters cut Francis (Seamoth) and Arthur’s (Cyclops) life’s short. I was heartbroken. Also this month I finished the audiobook version of Claudia Gray’s Master and Apprentice which was great and I caught up on some comics that I’ve had lying around for a while now, Hellboy: The Wild Hunt, Descender and Sex Criminals.

Amy: “From the last blog update, I’ve been doing a lot of planting due to the season and I’ve been trying out some new games: have been dabbling in Outriders due to Gamepass and have found it pretty fun despite its flaws, and have had a go at Buildings Have Feelings Too by local company Blackstaff Games this past weekend-love the art style and seeing so many familiar buildings! I’ve also started Cozy Grove, which I would really recommend as a cosy and lightly spooky game to play for an hour or two each day-I love the square bears equally but the post bear Patrice may have a slight lead due to being a literal parcel.”

Robbie: “Both the Chelsea mens and ladies teams have been doing really well lately so I’ve mainly been watching a lot of football over the past month. If you’ve ever thought about getting into football I would say that there isn’t a better time, with the mens Euros coming up this summer, and the ladies Euros next summer (come on Northern Ireland!), there always a game to be watched. With movies, if you get the chance, Minari is absolutely beautiful and I couldn’t recommend it enough. GTAV is new on Game Pass so I’ve been playing through a bit of it again, as well as replaying the Tomb Raider reboot trilogy.”

Shout out to Sean from Hytale (a fellow NI studio) who mentioned us in this lovely interview he did with Very Ali Gaming, and to Startup Pill for including us in their list of top software engineering companies.

Another blog, another Whitepot playlist. Here is our Spring 2021 mix to get you in that sunny evening mood.