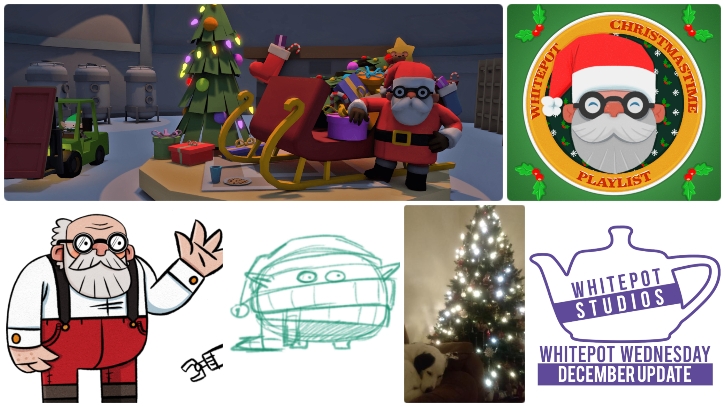 It’s the final Whitepot Wednesday of the year, WHOOP! We hope you are all doing well and enjoying some festive treats. Here at Whitepot, we’ve had a busy month making our festive stealth micro-game, Ho-Ho-Home Invasion which is available at this very moment. So once you are finished reading this Wonderful Christmastime Blog you can go over to Steam or Itch.io and download it for free. Make sure to leave us a wee review when you’re done 😀

Moving on to the blog this month we are gonna cover a little of the development of Ho-Ho-Home Invasion, show some Christmas trees, see what 2021 has in store and play some festive tunes. So rest your chestnut, preferably by an open fire, and let’s get going.

Ho-Ho-Home Invasion is a free festive stealth micro-game for PC, created by Whitepot Studios especially for this festive season.

Play as Santa preparing his stealth skills ahead of the big night (Christmas Eve). Deliver presents under trees, fill stockings, then make a swift exit – without getting caught by the automated robots Santa’s elves have created to help him train!

COGconnected: “If you’re looking for a fun experience to share with your family, this one might be worth a peek.”

Download the game for free on Steam or Itch.io

Also make sure to leave us a wee review

So back in November, we were all chatting having a laugh about the idea of making a stealth game similar to classic games like Metal Gear but with a festive twist. Here we are over a month later with a fun wee game for you all to play.

The development timeline on this project was much shorter than we’re used to so we didn’t really have time to explore as many design ideas as we’d usually like. The process is much closer to the 6 games in 6 weeks we did during the summer of 2019, we are given a brief and we’re tasked with coming up with a style that is achievable in that timeframe. What I like to do is use a style that I’ve been fixated on lately and practice how best to achieve that style, so on this project, I had been consuming a lot of Aardman media lately (Wallace and Gromit & Shaun the Sheep) and I thought it’d be fun to recreate that look. Amy and I had a fun conversation about what was key to that style and what our goals were on this project. While more time would have been beneficial, I think we did our best in achieving that style and also in keeping with the look provided by the asset packs we used for the house interiors.

Here are some of the concepts that Amy and I did at the start of development.

Some of the model work done on the game. Amy and I shared the workload on the decoration models for the games but were responsible for different character models.

A happy Elf wiggles their ears.

As we didn’t have a lot of time to build Ho Ho Home Invasion we decided to use a few assets from the Unity Asset Store to speed up development. We used “Behaviour Designer” by Opsive for communication purposes in the Enemy AI systems, and “Animal Controller” by Malbers Animations for the characters movement.

Behaviour Designer is a great asset that lets you build AAA standard AI systems using behaviour trees, a type of logic that determines tasks, and sequences to achieve those tasks, for AI agents in your games. However, we didn’t need that complex of a system for this game, so we decided to instead use the trees as more of a communication resource between the asset and logic that we wrote, rather than only using logic from the asset. This allowed us to be a lot more specific and cut down on a lot of the unnecessary details which we wouldn’t need. You can see an example of this in the screenshot below, which shows the behaviour tree of the Sleeper AI. As you can see if the agent can’t see or hear the player it will just remain in its idle state (the branch on the far right). However, if it can hear or see the player it will tell our Awareness System to increase the awareness of this agent, shown in the far left branch. As behaviour trees work from left to right the branch in the middle will then be triggered to check if the enemy’s awareness is of a certain value (a float value) and if it is below that value (meaning it no longer sees or hears the player) then it will wait for a period of time before decreasing its awareness.

The Animal Controller asset has a nice “Speed Sets” system which we used to monitor the speed of the player. If they are going faster or slower it can then react accordingly and change the volume of the player’s footsteps. This is shown in the following screenshot.

As you can see, we have different profiles for each of the player’s speeds, with footstep volumes being adjusted depending on which profile they are in. We were able to tie this system to input, so if the player was using a controller and were to slightly nudge the analog stick in a direction they would be in the low profile state, but if they were to fully press the analog stick then they would move into the higher profile states. You can see an example of what the code for this looked like below.

We knew we wanted to use the player’s footsteps to alert the enemies, therefore we needed to be able to access the volume of them at any time. To achieve this we used a global Variable (meaning it can be accessed by any system in the game at any point) which would set the volume of an Audio Source (a Unity component used to play sound) on each of the player’s feet. This worked well as it also allowed us to modify the footstep volume depending on what surface the player was walking on, e.g. carpet being quieter and hardwood being louder.  You can see an example of this variable being modified in the code above with “footstepVar.Value”.

Just as we wrote about in our September blog post, we used Evoke Music‘s AI generation to make the background music for Ho-Ho-Home Invasion. It’s pretty neat, so be sure to check it out!

Incase You Missed It

As well as launching Ho-Ho-Home Invasion we also helped kickstart the career of a burgeoning new Twitch streamer. You should check out Limmy’s work, apparently, he used to be on the telly.

Here at Whitepot we’re always moving and merging branches but lately, we’ve been decorating them. Here are all our lovely Christmas trees, tweet at us on Twitter or on our Discord with your own glorious festive creations. We’d love to see them 😀

Looking ahead into the new year we have some changes coming to the blog, starting in February we’re changing to bi-monthly blogs. This is to hopefully allow us the time to have some more in-depth material for you all and to allow us some breathing space between large posts. This year we’ve found it a fun experiment but at times it would be hard to come up with a new blog idea that didn’t involve us repeating ourselves over and over. So let us know what kind of topics you’d like us to cover in the New Year and we’ll try our best to accommodate your suggestions.

Aswell as the blog we’ll be keeping an eye on Ho-Ho-Home Invasion for bugs and fixes and we’ll be moving into the final stages of Stargazing after the holidays. We have some other things in development that we can’t wait to share with you in the coming future.

Adam: “I’ve been particularly busy this month but I have played a lot of a little game called Ho-Ho-Home Invasion, maybe you’ve heard of it? When I have had time to do anything else I’ve been dipping my toes into the buggy world of cyberpunk 2077 which I am enjoying, despite the crashes and glitches I’ve encountered. I haven’t been watching anything so far this month but I do plan on getting caught up with some of the required Christmas movie watching but, honestly, I’ll probably just watch whatever the TV decides I should watch, because that’s really what Christmas is all about.”

Matt: This month I’ve been playing Red Dead 2 online, playing Superhot: Mind Control Delete and Slime Rancher. I’ve been watching the Queen’s Gambit (Okay), Aunty Donna (Funny), Krampus (Meh) but I am really looking forward to seeing Cartoon Saloon’s new film Wolfwalkers this week. Music-wise I’ve been listening to Pillow Queen’s new album, In Waiting, and to “I Wanna Be A Cowboy Baby” by CMAT while playing Red Dead. Also, I finished my Wallace and Gromit fanart of The Wrong Trousers which you can see on my Artstation.

Amy: “This month I tried out Sea of Thieves finally and actually really enjoyed the little I’ve played so far-the sailing mechanic is a lot better than I expected and it’s pretty relaxing to just cruise along from island to island! I haven’t really been up to much else this month aside from some garden clean up but I can recommend not waiting 10 years to repot a massive orchid, that bugger will be IN THERE I can assure you. ”

Robbie: “There’s only one Christmas movie worth recommending and that’s Love the Coopers, streaming now on Netflix. Absolute perfection. My Wonderful games recommendations would be Wonderful Christmastime by CyberPaul Mc2077 Studios, and a notable mention would be Wonderast Christofmastus by Naughty Paul McCartney.

Our last playlist of the year is made up of  some of our favourite Christmas themed tracks. We hope you enjoy them as much as we do 😀

Here at Whitepot we’d like to thank all our friends, family and community for their support over the last year, thank you for reading our blogs, sharing our posts and playing our games. It means alot to us as a small Belfast developer that people take an interest in what we do. So thank you again, we wish you all a happy and safe holiday and may you all have a great 2021.