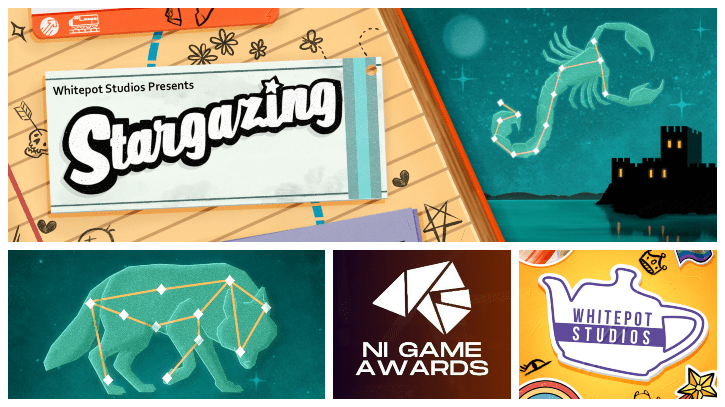 Just under the line but here we are with our February update! First of all, we hope you are all doing well and had a happy holiday season. We’ve been working hard the past two months on completing Stargazing and we can finally say we’re ready to G.O. for MARCH 3RD!

Just over a year ago we announced that we’d be progressing with the StarGazing prototype we developed back in the Summer of 2019, and it’s been an interesting journey with its highs and lows – but we’re nearly done. We’re all extremely proud of the work that we did on this little puzzle game, and we hope you all enjoy it too. 🙂

StarGazing by Whitepot Studios is an astronomically relaxing, beautiful, starry-eyed pattern-puzzler releasing free-to-play on iOS and Android on March 3rd.

With a cozy dot-to-dot style, zen beats, and plenty of constellations to discover, chill and stargaze with us as you make your way through our StarBook.

Stargazing is for puzzlers who enjoy solving challenges, chill seekers who enjoy zen experiences, and astro fanatics who have an interest in the stars above.

You come across the long-lost “StarBook” of your aunt Nicola – born 12th Aug 1978 (which makes her a Leo, she’d have you know) – overflowing with memories from when she first took an interest in the night’s sky in the 1990’s.

Often jotting down each constellation she recognised on the closest thing she had to hand, it’s clear to see Nicola’s StarBook is labour of love – an eclectic mix of receipts, napkins, tickets, posters, and other bits and bobs. If she could take a pen to it, it’s in there.

And now you’ve found it! Immerse yourself in the StarBook, constellation by constellation, learning how to join those stars in the night’s sky. Discover Nicola’s favourite constellations for yourself, as well as unlocking some of her favourite memories.

Whitepot Studios is a Belfast-based game development studio founded in 2016. Whitepot offers work-for-hire development services, as well as creating its own IP across PC, mobile, and console.

Whitepot won the 2019 UK Games Fund for its upcoming multiplayer murder mystery Murder At Malone Manor, and most recently self-published Ho-Ho-Home Invasion on Steam – a festive Santa stealth game (96% positive) – nominated for Game Of The Year at the upcoming Northern Ireland Game Awards.

The red carpet is calling, so we’re getting our suits pressed and our frocks frocked. StarGazing and Whitepot are up for a number of awards for this year’s NI Game Awards on March 6th – which you can find out all about here: https://nigame.dev/awards/!

We’re up for Best Studio, Best Art Direction for StarGazing, and Best Game for Ho-Ho-Home Invasion (our faither wud be proud). We’re also super hyped for Amy nominated for RISING STAR(gazing).

Thanks to all who nominated and voted for us – we feel honored to be considered for these awards. Voting is now closed but make sure to check out the winners on March 6th – you can find FREE tickets to the online event here: https://ti.to/ni-game-dev-network/ni-game-awards-live

Best of luck to all nominees, WE’RE ALL WINNERS! (unless we lose…)

We’re back with what we’ve been reading, watching, listening to and playing the past few months.

Adam: “Since our last blog I (like most people these days) haven’t been up to much. Helping get StarGazing ready has taken up a good deal of my time, but when I’m not working I’ve managed to get some Warhammer painted (you can check some of that out over on the #creative channel at https://discord.gg/whitepot!), played a bit of Ghost of Tsushima, Fallout: New Vegas and got back into Overwatch (in one of my first games back we somehow managed to get matched with our good friends over at Brain and Nerd). In terms of what I’ve been watching, it’s been a whole load of channel 4, I watched It’s a Sin (fantastic series,I highly recommend it) and I’ve been keeping up with Married at First Sight (sometimes you just need that kind of trash in your life!)”

Vicky: “I have been watching Married At First Sight, and playing a lot of GeoGuesser. I’m not even joking. I also watched the amazing It’s A Sin on Channel 4, deffo recommend checking it out if you haven’t. Great soundtrack too (which inspired a few of my choices in this month’s playlist). EDIT: I also write these entirely independently of Adam and yet we both always end up writing the same thing.”

Matt: I’ve recently gotten back into Animal Crossing and have really been enjoying it more, my partner and I have been sharing the island and it’s not been completely smooth sailing. They didn’t appreciate me supporting a beloved townsperson who wished to leave the island, it led to real divisions on “Tayto Land”. I’ve also been playing through Bioshock for the first time, which I am really enjoying, I was kinda surprised by how well it holds up. I’ve found it more enjoyable than most modern games. I’ve recently started watching the US Office for the first time and while I enjoy it, I ain’t crazy about it. I am much more a fan of the optimism of Parks and Recreations and the Good Place.

Amy: “The past month and a bit I’ve been mainly rewatching Portals To Hell; I have simple tastes-enjoy a goofy ghost show, rewatch the goofy ghost show. Apart from that, I’ve been listening to more podcasts than music recently: finally started the Magnus Archives which is a brilliant spooky fiction podcast, and to help me not be too terrified afterwards I’ve started Monstrous Agonies which is still supernatural themed but is cosy and charming (rather than ‘I’m not going to be able to look at a weird book the same again’ like Magnus). Also, RedWeb is another entertaining one if you enjoy true life unsolved spookiness!”

Robbie: “We’ve been watching lots of good TV lately; Upload is a new series on Amazon Prime that I’d really recommend, along with Money Heist on Netflix and It’s a Sin on Channel 4. Music wise I’ve been vibing on a bit of Taylor Swift, who has released about 500 albums since lockdown started, alongside some Jose Gonzalez and Dead Man’s Bones.

I’ve been dipping back into some of my favourite WW2 games as a youth over the past month. It’s been a nice experience going back to what we thought were realistic games back then and seeing how badly they’ve aged. For example, the first game was Medal of Honor: Rising Sun and I just spent the entire time marvelling at the character models, they have these little claw hands and massive mouths, which looks really weird during all the choppy pre-rendered cutscenes.

The other game I’ve been playing is Brothers in Arms: Hell’s Highway, which again was touted as the most realistic WW2 game of its time, it even had a large cast of voiced characters who made up the squads that you, as the leader, would command. However, again, the cutscenes are the most jank thing I have ever seen, they look as though the animators only had a limit of about ten frames that they could use and none of the characters’ faces actually move that much during dialogue. Also I’ve never met a more moany bunch of soldiers in my life, you stay in cover for more than ten seconds and you’re being hounded with screams of “We’re in a tight spot!” or “We’re gonna die if we stay here!” and I just sat there like, “Shut up…”. It doesn’t help that any time you do try to command these wimps, your main character literally s c r e a m s their names. I hate everyone in this game.

Here are the tunes that we’ve been listening to as we worked towards the end of Stargazing. ENJOY! 😀

Keep an eye on out for more Stargazing Content over the next few weeks.

Until then, we’ll be back in April with another blog update.