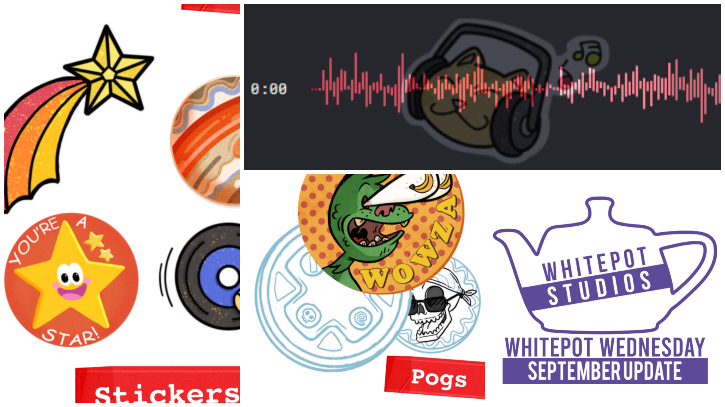 Hope everyone is doing well. Hard to believe it’s September already! To everyone heading back to school around this time, we feel your pain, and for those starting uni this month, we wish you all the best on this new adventure! Here at Whitepot we’ve been busy with Gamescom and preparation on the Stargazing Alpha (sign-up here!). Thanks to everyone who took part in the Alpha so far, we’ve rolled it out to a few devices and got some really useful feedback that we’ve been implementing over the past few weeks.

We’ll have another build going out to testers in the near future so keep and eye out for that. Next month we’ll have a more in-depth post about the process of getting an alpha ready for testing.

This month I wanted to give more details about the fun collectables in Stargazing, and Robbie has written a great piece on the Music of Stargazing.

The Collectables of Stargazing

In previous blogs we’ve mentioned that the set up for Stargazing is that you’ve found a notebook from an older relative’s teenage years, in which they recorded the constellations they’ve found in the night sky. Today we want to give you a little more insight into how that backstory is uncovered by the player.

Throughout the game as you complete constellations, you will unlock mementos owned by your relative. These mementos give you insight into their personality and what their life was like at the time of keeping the notebook. When developing the narrative aspects of Stargazing we wanted to create story elements that add to the experience rather than drive the experience. We want it to feel like you’ve stumbled upon these things.

The game takes place in the mid 1990s, and we’ve had a lot of fun developing “retro” (I can’t believe I wrote that) inspired collectables for the game. Some of the fun collectables you can expect to see are SICK Stickers, SLAMMIN Pogs and FLY bubblegum cards. As well as those RAD items, you’ll also unlock polaroids of your relative’s summer adventure. These polaroids are fun little snapshots of their last summer at home.

The Music of Stargazing

Like most of us, I am a huge fan of Video Game music. Most games aren’t complete without a good soundtrack and if done correctly it can sometimes be on par with or even outshine its own game’s mechanics, like in the Halo series for example. However, as an indie dev who doesn’t have any experience in making your own music, it can be a real challenge trying to fulfil that part of the game design as hiring an external composer or licensing music online can be costly.

This means that most of us will turn to sites like Freesound.org to find music tracks. The problem with this is that selection is quite limited and any good tracks that you do find will almost definitely have been used by designers in other projects, and thus your project will lack a level of originality. We just recently put out a build of our mobile game; Stargazing, and we got some nice feedback from players saying that they enjoyed the game’s music. So, in this blog post, I thought I’d go about explaining how I sourced and implemented the game’s music.

The first thing to do is decide on your game’s tone and what emotion you are trying to convey with its gameplay. Once you have this you can then start to look at what kind of instruments would best fit that. For me, I knew that Stargazing is a game about finding constellations, so I wanted to convey that sense of wonder and intrigue when you look up at the night sky. The game is set at night, so I knew I wanted it to be a calming and relaxed experience, with a lot of night-time ambiance.

We can immediately start to see some genres of music crop up here (calming, ambient) so that’s a good starting point, but how do we convey wonder and intrigue? Well, we can look to other media for inspiration, as well as using ideas from our setting. We know from pre-existing sci-fi games and space movies that a lot of electronic and computer-generated sounds (like drum machines) are used as it metaphorically represents the same technology used on things like spaceships, so music like this could work well. Something as simple as an ambient ‘beep’ can successfully convey a lone spaceship transmitting through the stars, so finding a track with this as it’s drum sample can work wonders for immersing your player in the game’s setting. Furthermore, the whole idea of being in wonder of space and the galaxy is a very human emotion, so how can we convey that idea? Well, the most ‘Human’ example of an instrument would be finding a track with a choir sample on it (nothing more human than the human voice).

So, we’ve got our tone (calming, ambient) and our emotion (wonder, intrigue) as well as some extra sample ideas (beeps, choirs), so how can we go about finding music that matches this? This is where Evoke Music comes in (evokemusic.ai). It’s a great library of royalty-free, AI-generated music that you can use across lots of creative projects. However, the best part about it is that it allows you to enter certain keywords, and it’ll then search its library and give you a selection of tracks that match those keywords. All we need to do is type in “Ambient”, “Wonder”, “Choir”, “Beeps” and see if we like the results.

As you can see it has returned 27 potential tracks for us, as well as some info about them below. If we click “View All Parts” we can see the track broken down into different sections. This is handy if you just want to download the track’s melody, or if you are using an audio engine like FMOD and want the track to change based on the game’s state. In the latter case, you could then have sections of the track be layered in and out, for example bringing in the drums if an enemy approaches.

The kicker is that if you are a free user you can only download 3 tracks per day, so if it’s something you can see yourself using a lot, I’d suggest going for one of the paid tiers.

To implement the music, I just created a simple singleton music manager that never gets destroyed (meaning it can exist across different scenes). This is a small game, so I didn’t want it to be too complex. I create two lists of music clips, one called “MusicClips” which I populate with my music at the start of the game, and one called “PlayedMusicClips” which gets populated after each clip is played. Once all the music clips from “MusicClips” get moved over to the “PlayedMusicClips” list, I reverse the process and move all the music back over again. I did it like this to ensure that no clip is played twice before all the other clips have a chance to be played. I also use the “Random.Range” check to randomly select which clip is to be played next.  The benefit of using a list like this is that it allows us to add or remove tracks as we please, without having to change any of the music managers code. Finally, to check when a clip has finished playing, I just use the “AudioSource.isPlaying” Boolean check inside of Unity’s update method, this will return false when the clip has finished.

Adam: “This month I’ve been jumping around the new Flight Simulator, Fall Guys, Tabletop Simulator (particularly to play Codenames and some 40k with friends) and Vermintide 2, all of which I’ve been enjoying. Now that the snooker’s over (my TV love affair from last month) I’ve just been watching whatever’s on in the background while I’m doing some painting, so that ranges from Buffy the Vampire Slayer (I’m sure halfway through season 5 or something is a great place to jump in), through Chris Tarrant: Extreme Railway Journeys (genuinely got into this and keep an eye out for it now) to Married at First Sight Australia. So, overall, a fairly uneventful month for me this month.”

Vicky: “I’ve been out of action the past few days with a bad bug (???), but that aside, I’ve been busy following up all our Gamescom excitement this year! As for what I’ve been reading, watching, and playing – there’s nothing I can particularly pinpoint, but I have been playing some Overwatch again. Also, the new Tony Hawk game came out, and I really want to play it, especially since seeing this meme:”

Matt: This month I’ve been on a bit of a Batman binge, been rewatching the 90s animated show and reading some of the newer comics. I also watched the Superman show from the same era and I was honestly surprised by how much I’ve been enjoying it. The animation is really wonderful and Bruce Timm’s aesthetic really adds a timeless feel to these cartoons. Aswell as that I’ve been playing Arkham Origins, Resident Evil 7 and the DLCs for Control. There’s an Alan Wake tie in DLC for Control that I would highly recommend for fans of Alan Wake.

Amy: “This month I’ve been watching my regular schedule of Gardeners World as well as a lot of the Hairy Bikers again, their Bakeation series this time, which is as cosy and funny as their other shows. I’ve been playing a bit of Fall Guys purely because I like the daft costumes, and tried Settlers of Catan irl with my household – potentially involving more vengeance over stolen materials than expected by the makers.”

Robbie: “Haven’t really watched or listened to anything worth recommending this month however I did start playing Tell Me Why on Xbox Game Pass. It’s from the same people who made Life is Strange and deals with a lot of current issues, defo worth checking out.”

Please enjoy our brand new playlist to get you in that Stargazing mood.

Chat to you all soon,