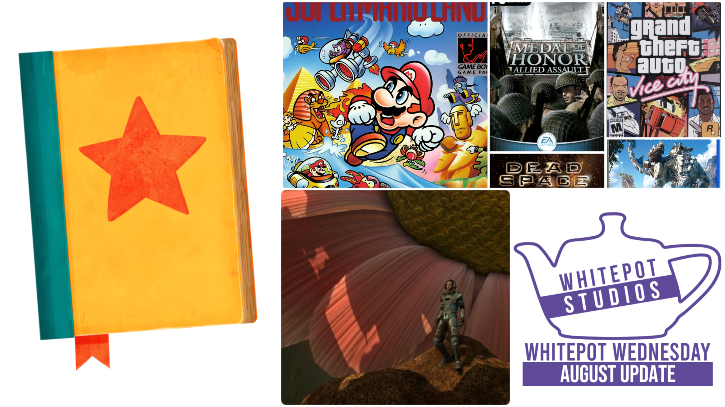 Hope everyone is doing well this month – we here at Whitepot had a lovely wee break a few weeks ago, before we got stuck in preparing for Gamescom (which is at the end of this month!). It’s good to take some time off as a team to get some chillaxing time – we’re back now and ready to go!!!

As you may know, before the pandemic we were based in a wonderful games co-working space called the Pixel Mill, with lots of talented up and coming studios from Northern Ireland. We may not be there physically, but we’re still there in spirit ? With that said, we wanna take a few seconds to congratulate our fellow Pixel Mill alumni Brain and Nerd on their Creative Europe funding!

Their game Hortalius was one of two NI games selected for a Creative Europe grant. Hortalius is a sandbox survival game inspired by “Subnautica” and “Honey, I Shrunk The Kids”. We’re super chuffed and wish them all the best.

You can follow the artist of their super cute team pic (Travis Morrow) on Twitter here, and read all about this year’s NI Creative Europe bonanza on PlayDiaries here: Brain and Nerd, Italic Pig get Creative Europe UK funding.

We’ve got some great news! Our astronomically relaxing constellation Pattern Puzzler game Stargazing is close to completion 😀 We’ve been working hard for the past few months, and we’ll be sharing screenshots and videos on the game every Thursday leading up to the release of the game, so be sure to follow @stargazingWP on Twitter, as well as our main account @whitepot.

What are some of your favourite game covers? Head on over to the Discord to let us know at discord.gg/whitepot.

Adam: Last month I was all about playing Total War: Warhammer 2 and the start of this month was much the same! However, I have been taking a break from it to play some more of the Master Chief Collection. Speaking of Warhammer, a new edition of Warhammer 40k came out and with it a new big starter box so I’ve been trying to finish off some stuff in my mini backlog so I can dive into that! I’ve also unironically gotten into the World Snooker Championship and have had it on in the background for the last load of days!

Vicky: I set out on a challenge to complete Human Fall Flat without Googling a single thing, and I did it. I learned how to brute force wall climb in ways that definitely were not intended, and definitely didn’t learn how all the mechanics worked properly, but I did it. Also been playing a bit of Clustertruck – basically anything on Game Pass. I promise we’re not being paid to talk about Game Pass (pssst Microsoft). I, too, unironically got into the World Snooker Championship and tried my hand at some of my own Warhammer Mini painting.

Matt: This month I’ve been rewatching I Think You Should Leave with Tim Robinson, I also watched Clue and Upgrade. This month I finished Grim Fandango (with no hints or cheats which I am really proud of), Journey to the Savage Planet (It’s was fun while it lasted), Carrion (interesting puzzle game) and I’ve also just started playing Grounded with the Whitepot crew, also Yakuza 0 and Outer Wilds. All good games.

Amy: This month I’ve been playing some Minecraft Dungeons, which is a lot of fun and easy to pick up, it’s on GamePass too so if you have that then definitely give it a shot! I also watched Knives Out finally and I would highly recommend it even if you’re not a big murder mystery fan.

Robbie: This month I’ve been playing a lot of Rime, it’s a really cute 3D exploration game that you can get on Game Pass for free. We’ve watched a ton of movies (nothing else to do), some standouts being Palm Springs, Philomena and the Plot Against America (that was a TV show but we binged it in like 2 sittings so it was basically a movie).

Listen to our gaming playlists. A collaborative playlist of all our favourite music from games 😀

Chat to you all after Gamescom,